“To The Dead Sea and Back” 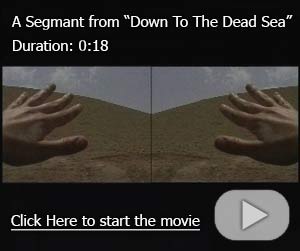 The work was done during a journey to the Dead Sea. One hand was devoted to the wind and patted the topographic contour. Simple cloning of one direction created the effect of four directions. There were few versions for this installation. in this version, two big projections played on two close / meeting walls and continued the dialogue.

Down To the Dead Sea

“NatureNation” . Museum On The Seam:

Back From the Dead Sea

“To The Dead Sea and Back” “”NatureNation” . Museum On The Seam:

…”Michal Rothschild shapes in her imagination and with her hands the road to and from the Dead Sea.
She caresses the landscape and recreates the contours of the mountains and valleys passing by her. She raises and lowers the level of the horizon (since the beginning of this century the water level of the Dead Sea has gone down by almost 80 feet) and changes the topography which she crosses like the sounds of changing music in the background.

The trip to the Dead Sea and back is a brief visit that in our consciousness relates to the hastened process of channel building and erosion in the area of the Sea. The threat to the infrastructure and the appearance of the swallow-holes (collapsing pits) that have opened wide around the area of the Sea, threaten the unique tourism industry that should have been flourishing in this area. The damage to nature’s treasures and the receding coast line with mud filled surfaces beneath, have caused severe harm to the desert oasis and the drinking water systems on the beach. Thus, one of the most unique and fascinating places in the world is disappearing. Even innovative planning and the designing hand of man will not not be able to restore or repair this difficult reality.”