This installation is constructed of three parts: A slide projector on one side, a television monitor on the other side and a pile of books and tapes in the middle.The slide projector is using the television monitor as a screen and is constantly projecting on it a slide of a plain. In between the projector and the monitor I placed a pile of books and on top of it some VHS tapes. From the tape on the top I pulled out a skewer to which I attached a small doll.

Since this structure stands between the light of the slide projector and a television monitor it throws a shadow of the small doll on the television screen. ? The television screen alternates on and off each ten seconds – a video of a “moving” plane and a black screen. When the screen is off and dark, the projector is casting upon it an image of a plane and when this happens, the doll throws a shadow on the TV screen.

When the screen is turned on and bright it shows a plane which seems to be flying although its the same slide of a plane; this happens since the video was shot when the slide was projected on a moving fabric. 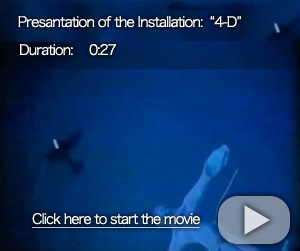